When I look into the pond at my local park, there’s an amazing ecosystem of life at play. Algae covers the surface, and small fish come up to nibble on the meal. In the mud, bottom-feeding clams and large eels wait for prey.

My pond is only one example of the diversity of life on Earth. Just outside the city are dozens of lakes and grasslands, each with their own interconnected ecosystems. How did life emerge into so many coexisting species?

The answer is hidden in a property called open-endedness. In an open-ended world, innovation never ends. Instead, solutions create opportunities for more solutions. The algae create a food source for the fish. The fish create an opportunity for larger predators, who provide food for bottom-feeders when they die.

If you look closely, you can see open-endedness in many domains. In Ancient China, local farmers formed towns and villages, which became the foundation for feudal empires. The computers we use today are built off of semiconductors, which were discovered after research into radio waves.

The key feature of open-ended systems is that they never stop developing. Life will never be done evolving, and people will never be done creating new technology. As an AI researcher, this is a very useful property – it means we can train AI agents on potentially limitless tasks. It’s hard to imagine achieving general intelligence by classifying cats and dogs, but an AI that can invent increasingly complex technology would surely show us interesting behavior.

In this post, let’s explore basic open-ended principles through a cell-based gridworld. 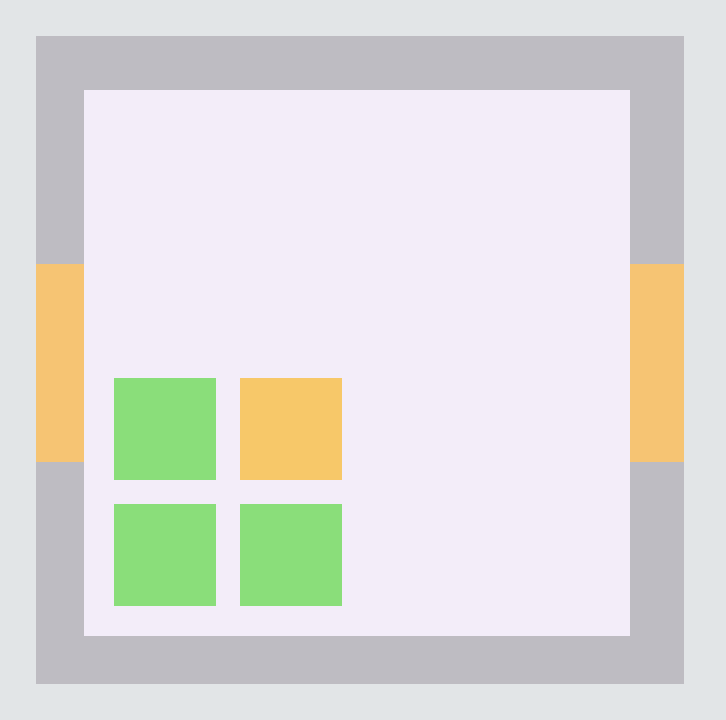 When the yellow outline is full, a cell has enough energy to replicate, and will create a clone of itself in a nearby square.

Let's take a look at how this simple cell will behave when we set it loose in an 8x8 world.

Easily, the origin cell spreads everywhere. But once the world fills up, the simulation reaches its end.

This is a common issue when designing open-endedness: the world can reach a stable state, where no more progress can be made.

In our case, the problem is there’s no space. Let’s try introducing a death timer. A few seconds after being born, cells will die off. In addition, let's introduce a small chance for a cell to mutate its genome when duplicating.

Together, these changes define a search algorithm for new genomes. When a cell dies, there is an opportunity for a new cell to take its place. So if a cell has a mutation that lets it duplicate faster than its neighbors, its genome will become more prevalent.

However, once Photo-rich genomes have spread, progress stops.

The problem here is a lack of peer dependency. The most crucial aspect of open-endedness is that solutions must create opportunities for more solutions. In other words, when new organisms appear, new niches must develop. Our lake is full of algae; now it’s time for the algae-eating fish to appear.

To try and see this effect, let’s introduce two more variations into Cellworld.

How will these changes affect the complexity of our little world? Let's take a peek.

So, that was a bit of overdramatization. But you have to admit, with just these two modifications, much more interesting stories emerge. Instead of a single optimal species, we now have a cycle, where a new species can potentially overthrow an older one.

In an open-ended world, solutions must create opportunities for more solutions. For worlds of interacting organisms, there are three key principles to sustain this behavior:

Since this Cellworld was fairly simple, both the possibility space and peer dependency of cells were limited, so we eventually stopped seeing novel behavior.

"Open-endedness: The last grand challenge you’ve never heard of", by Kenneth O. Stanley, Joel Lehman and Lisa Soros. This article is a great motivator for why we should care about open-endedness -- namely, its potential to create innovations that are too complex to be designed for directly. The article also gives an overview of past work in the field their reasonings.

"Identifying Necessary Conditions for Open-Ended Evolution through the Artificial Life World of Chromaria", by Lisa Soros and Kenneth O. Stanley. This paper gives a good foundation for finding the principles that allow open-ended evolution to occur. They propose a minimum criterion for survival, and define peer dependency as creating novel ways for new individuals to achieve this minimum criterion.

"Self-Organizing Intelligent Matter: A Blueprint for an AI Generating Algorithm" (Anonymous). This recent paper works with open-endedness in the neural network domain. They show an interesting formulation where cells are neural networks that can push/pull chemicals in a gradient around them.

Appendix
In a follow-up experiment, here is a Cellworld with a slightly more complicated ruleset. At any timestep, a cell may decide to gain energy, replicate itself, or attack a neighboring cell. A cell's genome is defined as a behavior tree of these actions, along with conditions for them to take place. For exmaple, the origin cell's behavior tree says: duplicate if I have more than 50 energy, otherwise gain energy. There are two main evolutionary milestones. First is when species E7 learns an attacking behavior. The second is when species 3E learns to not attack its own offspring, a mutation so strong that it takes over the world.
Interested in AI, games, open-endedness? Come discuss with me on Twitter!
Follow @kvfrans

When algae is in the pond, a fish will come to eat it. When fish are in the pond, birds will come to catch them. This is an example of peer dependency: a species’ survival depends greatly on the presence of other species. Peer

This month was a return to form. Ever since Rain Project, I've always had this urge to make a true boss battler, combining platforming and bullet hell. With November's Omakase, I finally took the dive with Bullet Dance. I'm super proud of this month's